It is quite amazing to think we have reached the longest day, in many ways it is quite a sobering thought that we are about to start the slow countdown back into winter, anyway let’s not think about that now as there is so much to enjoy in the countryside just now.

The rain last was incredibly welcome, by me at least, and hopefully should give a boost to the flora in Attenborough’s fields.

The grasslands, particularly the ones on the Woodland Trust’s Merry Hill are alive with insects, particularly obvious are the midsummer butterflies who have emerged in the last few days, if you walk on a warm and reasonably still day you should see very good numbers of Marbled white (see photo), Ringlet (chocolate brown), large and small skippers (orange moth-like), meadow brown (dull brown with a hint of orange) and Common Blue ( sadly not particularly common) all within the grass. 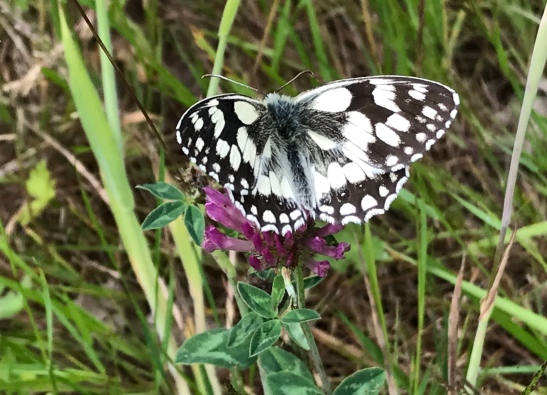 These ‘grassland’ butterflies are thought to have a clever strategy to prevent being eaten by birds as their caterpillars feed on Ergot which is a fungus living on grasses. This ergot creates toxic alkaloids which build up in the caterpillar and into the resulting butterfly.

If you find a patch of bramble in flower in a sheltered sunny location you will find them a magnet for butterflies and bees. Today was a real red-letter day for me as I saw my first very local silver-washed fritillary amongst the bramble, his butterfly is truly magnificent. It is quite large with orange chequerboard pattern and is a strong flyer which has helped it to colonise new sites in recent years (hopefully now on Merry Hill). Well worth looking out for. It was previously found in ancient woodland sites which have violets which is the larval plant but now is more widespread.

In an earlier piece I mentioned what I call the betony field, which is probably the best bit of unspoilt and unimproved meadow locally, this small triangular field is found on the greenway just next to the exit onto Oxhey Lane and By the Wood. 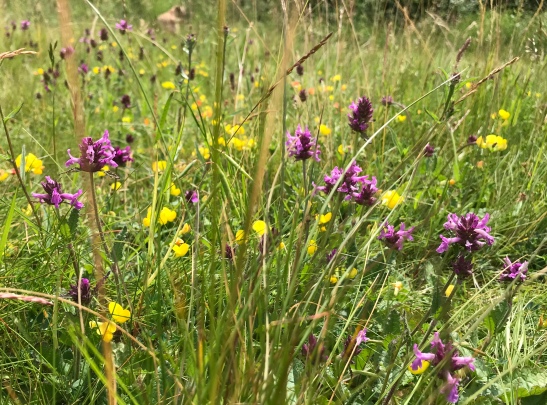 The star flower for me as my name suggests is Betony, see photo. It is just starting to flower now and is a real magnet for pollinating insects. You will also find patches of yellow rattle a parasitic plant that weakens the adjacent grasses, it is often suggested when trying to establish a wildflower meadow, to use this species, as it greatly decreases the vigour of grasses giving the wildflowers more of a chance to establish. It is named as it was has a seed pod which when ripe will rattle when the plant is gently shaken and was used by farmers of old as a guide for the best time to cut their meadow for hay.

Much of the spring birdsong has ceased as birds are now busy bringing up their new families, one very noticeable and noisy bird just now is the Jackdaw, this is a small member of the crow (Corvid) family. And like all corvids around the world, they are very intelligent and social birds completely unfazed by humans. Its body is a dark grey compared to the black of the carrion crow, and rather handsome at close quarters. The numbers in the fields are parents and juveniles hunting for invertebrates often near the cattle and you can hear them from quite a distance by their distinctive ‘Kya’ call. This is one of the most successful species in recent years with UK populations doubling in size in the last 25 years. Its success being down to being very adaptable and happily nests on rugged coastal cliffs or a chimney in Oxhey! Their choice in food also very variable- happily eating insects, seeds, human food scraps and unfortunately young birds.

Well, I hope you all enjoy the coming week, is expected to be hot so if you get a chance go out and find some butterflies.

Join us or renew your membership here